The BE2-RMW features multi-level high-performance SRAM memory with Embedded In-Memory BURST functions for speed and RMW functions for processing data. We combine this with our high-speed serial protocol I/O interface to accelerate your application’s performance. 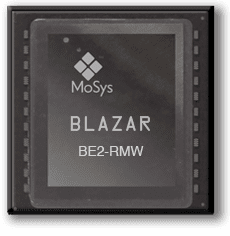 The heart of the memory IC is our advanced & parallel array of 1-T SRAM with a capacity of 576Mb.

The tRC is 2.67 ns allowing up to 2.5 billion transactions per second.

MoSys’s Accelerator Engines are designed using 16 SerDes lanes that can transmit data up to 12.5Gbps, with an optional rate of 10Gbps. MoSys’ GigaChip Interface (GCI) delivers  full duplex, CRC protected data throughput, enabling up to 2.5 billion memory transaction per second on as few as 16 SerDes Lanes.

The RMW Functions are focused on DATA COMPUTING where there is need for memory location modification involving RMW in applications such as metering, as well a single or Dual Counter update for statistics.

The RMW Functions provide a least two levels of acceleration. First, the RMW functions can be executed with a single command. Second, since the modification is executed within memory, there is no need to move the data out to be modified, and then back into memory to write. This removes all of the associated I/O latency.

Burst functions are designed to get data in and out of the memory more efficiently by reducing the number of commands. Normal transmission requires one command for each transfer of data. However, by bundling eight data words to a single command, designers can eliminate seven unnecessary commands. The BURST commands enable the transmission of 2, 4 or 8 words* per command cycle.